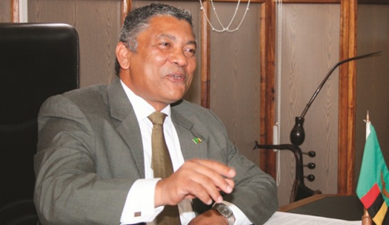 GOVERNMENT says it is time people became action-orientated as opposed to just talking to ensure factors hindering Zambia to become the food basket in the region are addressed. Minister of Agriculture Given Lubinda said the country has been talking, but less action has been taken to address various challenges affecting agricultural productivity such as poor market access and low productivity.

Mr Lubinda said when he received a formal submission of the Food Reserve Agency price setting study from the Consumer Unity and Trust Society, that Zambia has high agricultural potential, which has not been fully exploited due to a number of factors such as unfavourable weather patterns, macroeconomic, environment and continued inventions by the stakeholders and the people.

Mr Lubinda said Zambians should figure out how to address challenges affecting agricultural growth to maximise productivity and ensure the country is food-secure. He said increasing agricultural production can only be achieved through sustainable agricultural intensification and inclusive participation by agro stakeholders.

Mr Lubinda said Government recognises the dual nature of the agriculture sector in which the vast majority of small-scale farmers are resource poor, have low production and productivity and are usually food-insecure.

Earlier, CUTS board chairperson Yusuf Dodia said the study, which was conducted under the Competition Reforms in key Markets for Enhancing Social and Economic Welfare in Developing Countries (CREW), is aimed at addressing some of the challenges affecting the agriculture sector in Zambia. Mr Dodia said the CREW project will also help to assess the benefits of competition reforms on consumers and producers’ welfare.

This news can also be viewed at:
https://www.daily-mail.co.zm