Zambia joined the rest of world in the commemoration of the World Consumer Rights Day which falls every 15th March. This is an annual event set aside to promote the basic rights of all consumers and on this day, the world community comes together to demand and see to it that the consumers rights are respected and protected by all those engaged in commerce.
The global theme was “consumers for fair financial services campaign” and Zambia had a local theme dabbed “Consumer rights and obligations-Knowledge is power. The local theme was constructed in this manner to suit with the current developments in the country aimed at protecting the consumer welfare.

The commemoration, proceeded by a March past and saw hundreds of people gathering at Kamwala square, South of Lusaka City-were the event was held.
Speaking at the commemoration, Consumer Unity and Trust Society (CUTS) Board chair Ambassador Love Mtesa said that this year’s theme was very appropriate especially now that the Government recently passed the a new law looking at Competition and Consumer Protection.
“It is time that Zambian consumers understood their rights and their obligations, He said, Ambassador Mtesa commended government on enacting this law which and he said consumers would heartily welcome because it endeavours to protect their rights and interests.
He however stated that having a good law is one thing and making it work effectively is quite another hence imploring stakeholders to play their part in the enforcement process.

And speaking at the same function, the Chairman of the Competition and Consumer Protection Commission (CCPC) Mr Bernard Chiwala said that the role that consumers play in the development of any key economy can not be overemphasized.
“Consumers trigger demand for goods and services thereby creating job opportunities for discerning entrepreneurs. Consumers directly influence job creation in the country” he said.
Mr Chiwala further acknowledged that most consumers are faced with a lot of problems. Rampant supply of defective products and denial of liability by business persons to take responsibility for the defective products they supply were sighted as some of the problems. 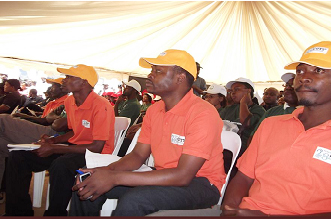 However, he re-echoed Ambassador Mtesa’s comments and also thanked government for enacting the new Competition and Consumer Protection Act 2010. He said that the Act gives the commission enough administrative powers to fine those who abrogate the rights of consumers. He sighted some of the consumer related violations which the new law wishes to address as the displaying of disclaimers “NO refund No Return and those found wanting would compel to pay 10 percent of the annual turn over to the commission. He further added that in 2010, the Commission managed to recover more than K50 million in cash refunds and products replacements for consumers.
And, representing the Bank of Bank (BOZ), Mr Chisha Mwanakatwe-Director for Non- banking Institutions at the Bank of Zambia, gave a different dimension by looking at the financial sector. He explained that the BOZ seeks to level the playing field between suppliers and consumers of financial products. “A level playing field is important as the majority of retail customers have less information about their financial transactions. And this result in excessively high interest rates paid, limited understanding about financial options and insufficient avenues for redress,” he said.

Mr. Mwanakatwe further said that the World Bank discussion report suggested that each year, the global economy adds an estimated 150 million new consumers against a wide array of financial services, made possible by technological innovation and increased competition for financial products. “Most consumers are in developing countries, where consumer protection and financial literacy are still in their infancy. While the majority of consumers usually have inadequate, or lack, information about the financial system and financial transactions, financial service providers often have a great of information about the consumer and the market, including credit histories, market assessments, and analysis to inform their decision”.
He said that because of this and much more, there is need to put measures to protect the consumers and enhance financial literacy among consumers. Weak consumer protection and financial literacy can render households vulnerable to unfair and abusive practices by financial institutions. Meanwhile Deputy Minister in the Ministry of Commerce Trade and Industry Dr Lwipa Puma started explaining the history of world consumer rights day and elaborated on the eight consumer rights as enshrined in the UN guidelines.

He further said that government places great importance on welfare of the consumers and also on the need to have knowledgeable consumers who play a key role in creating competitive and fair business environment. He said that to this end, the government has created the CCPC and other regulatory bodies which sets out government vision and mission in developing competitive and fair markets that will lead to industrial and economic growth and development.